I started hunting with Larry Jarrett about 2010, and have been to his Stites, ID ranch every season – sometimes twice a season – every year since.

I was unfamiliar with “stand” hunting before hunting with Larry. My normal approach had been “spot and stalk,” and admittedly I was a bit dubious with the thought of sitting and glassing for hours. Those doubts passed quickly, and it’s now my favorite style of hunting. I can tell you that after at least ten hunts on his ranch, with each day consisting of a morning and afternoon stand, I have never once NOT seen deer!    That’s an astounding record if you think about it!   Never once have I sat on a stand and not seen at least one deer, or several, including many bucks.

One memorable morning, as daylight began to brighten my surroundings enough to see, deer started to appear.  Everywhere! By the time Larry came to retrieve me for breakfast (about 10:30AM), I had counted over 70, including 17 bucks! I let the morning pass without firing a shot, preferring to wait for other options.

And you’ll see not only mulies and white tail deer, but the observant hunter will spot anything from coyotes to black bear, elk, turkeys and pheasant, and if you’re truly lucky, perhaps even a mountain lion.

Larry’s significant other, Vicki, is the real backbone of the entire Lazy J ranch. She will cook two outstanding meals a day, send you out with a box lunch, provide pre-dinner snacks, tend the wood stove, clean up, and, now get this, when Larry’s called away or otherwise occupied, she takes over his job, right down to tracking and field dressing!    I am in awe of her.

Larry and Vicki have done a terrific job, and over the many years I’ve returned there, I’ve seen improvements every year, from new stands to feed plots (planted grass/alfalfa, not bait!), and even watering holes, all designed to improve his deer herd – and it’s working!   I’ve seen better quality deer these last two or three years, and this year I left several very nice bucks out there to breed! They’re still there! 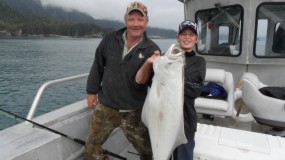 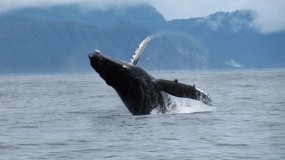 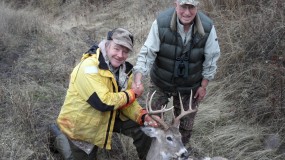 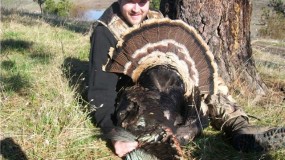